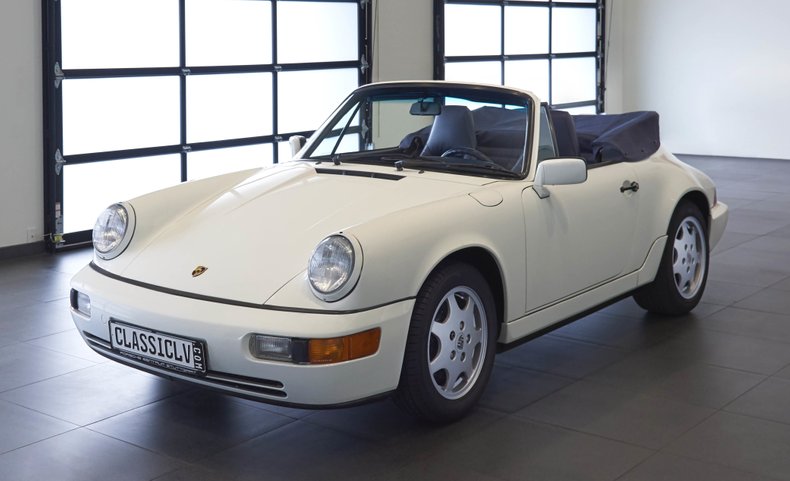 In 1989 Porsche introduced the 964 generation of the 911 as a replacement for the long-standing G-Series which was produced from 1974 through 1989. The 964 was considered 85% new compared to the old 3.2 litre 911's. The first 964's that were introduced were offered only as C4s which were "all wheel drive". The first C2s with rear wheel drive were not introduced until 1990. These cars were all offered with the venerable G50 five-speed transmission and a new-to-the-911 "Porsche Tiptronic" a load switchable, four-speed, sport transmission. This gearbox was produced for Porsche by ZF.

The car we present here is a 1991 911 C2 Cabriolet with Porsche Tiptronic. This car has just over 50,000 miles on the odometer. This 911 still wears stunning all original paint throughout. The Grand Prix White looks beautiful over the Blue Leather and Blue Top on set of Design 90 16" wheels. The top is fully electric; you can drop it while waiting at a red light. This 1991 911 has both a driver and passenger front air-bags.

Our Master Classic Technician has performed a fifty-seven point inspection of this Porsche. He has serviced the car and it is ready to enjoy! This 911 would make a great daily driver or it would be an awesome first time Porsche for someone new to the brand. Maybe you are just tired of pushing the clutch pedal but still want to run an air-cooled Porsche, this is the 911 for you!! Contact Steve Thiel to purchase this fabulous Classic Porsche @ 702-383-6080 or sthiel@gaudinporschelv.com.