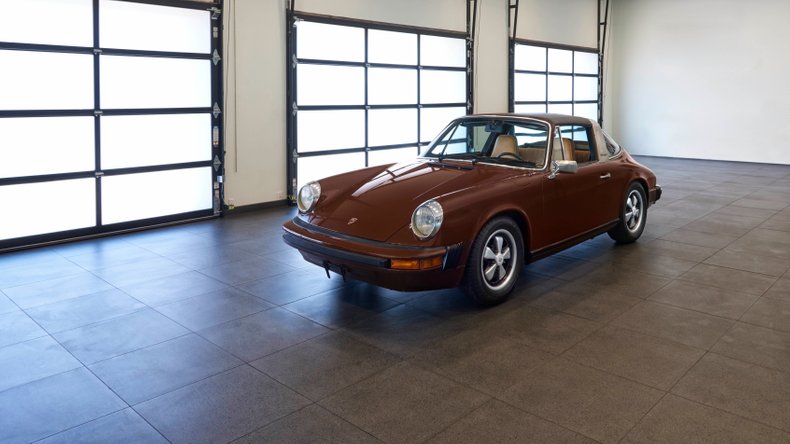 For the model year 1974, the 911 know internally as the G Series, saw three significant and major changes. First, the engine size was increased to 2687 cc with the purpose of achieving higher, more "driveable" torque. The second change was centered around the new very distinguishable impact bumpers conformed to the low-speed protection requirements of US regulations. These represented an unmistakable change in the appearance of the 911 ,and finally the third change was the use of K-Jetronic CIS Bosch fuel injection in two of the three models in the line up; the 911 and 911S models. These two models retained the narrow rear arches of the old 2.4 version of the 911 but now employed the 2.7-liter flat-six engine producing 150 hp.

The 911 Targa we present for sale here today we actually know well. This is the very first Classic that Gaudin Porsche ever sold way back in October of 2015 (the car even touted the internal Classic Stock number of PC001!). The car was sold to a local collector who enjoyed it as his sole non-turbo, air-cooled 911 while building his collection. He recently traded this and a much younger GT car for a brand new GT car. While in his possession the car received the very first in the world "Porsche Classic Technical Certificate". Gaudin Porsche of Las Vegas was the pilot dealership for the CTC program and this Targa received the first CTC issued in the world.

Fascination for Porsche Classic vehicles is always closely linked with Porsche history. We are proud of our history and appreciate that your car is a part of it. Your Porsche Classic vehicle's part in Porsche history is further enhanced with the Porsche Classic Technical Certificate. This document was created for your Classic 911 Targa showing your vehicle's status and options at the time of delivery in model year 1974. It includes all vehicle data available as of this writing. Your Classic Technical Certificate also states whether your engine and transmission number and type remain consistent with the vehicle's original equipment trim and options at the time of delivery. The findings listed on the Certificate are confirmed by visual inspection of all markings present.

This 1974 911 Targa has been repainted in its original shade of Bitter Chocolate with a Cinnamon interior consisting of Tan leatherette seats, Brown carpets and Black dash. The condition of the interior is very good with only a few imperfections. This car starts and drives beautifully. The motor pulls strong and the car handles like you would expect from an early Targa. This 911 would make an excellent addition to any drivers collection or perhaps a great "first" Porsche for someone new to the brand or new to "air-cooled".