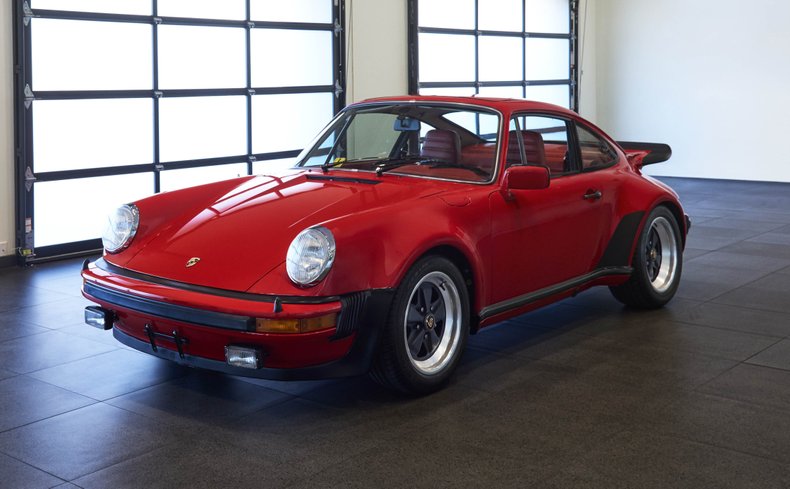 Only one word "Wow!"

In 1975 Porsche turned the sports car world on its head with the release of the 930 Turbo Carrera. Innovative forced-induction technology that Porsche was using on their Turbo Carrera RSR to dominate at Le Mans, was now available to the public to drive on the street!

The new "Top of the Range" Porsche debuted at the Paris Auto Show in 1974. Porsche began selling the car the following year. The car was finally imported for sale into the United States in 1976. Initially the cars made around 256 bhp but importantly made 243 lb ft of torque. This was a significant step up from the standard Carrera. With their short wheel base, rear engine layout and massive amount of torque, the 930 was definitely a handful for all but the most competent drivers.

The car we are proud to present here for sale is a 1977 model delivered new in India Red with "Special Wishes" Light-Red, full leather interior. This very well may be the only Turbo Carrera built in this color way. Several years ago this car was treated to beautifully executed glass-out respray in the correct original color. The engine bay and interior have been exceptionally well preserved over the past five decades. The interior still smells like leather and the seats are soft to the touch. The grain is adorned with gentle patina of time. The leather is free of scratches or scars. Additionally the dash pad is still in great shape with just a touch of wear right behind the top of the steering wheel.

All of the gauges work and function as they should. Even the original Blaupunkt "Bamburg" radio still has a microphone for the optional recording unit! The car starts easy and quickly settles into a comfortable idle. The shifter for the 4-speed, 930 gearbox moves swiftly though the cogs. the car is surprisingly easy to drive. The turbo offers a laggy but satisfying rush of torque to move you down the road. The brakes require a strong foot but respond with a strong bite. The steering is quick on turn in despite the car riding on very comfortable suspension. All in all this car makes for a great driver even by today's standards; it just keeps on making power and speed in any gear.

The Turbo Carrera is the most desirable model of the 930 / 911 turbo range from 1975 - 1989. Some of that is due to the low production numbers, just 2800 units were built from 1975 - 1977 vs 19,000 from 1978 - 1989. The other part of that is likely due to the fact that it is the prettier version of the car boasting the original "whale tail" rear wing while the later cars had to make due with the "tea tray" wing which was much larger and cumbersome because it had to accommodate the later cars inter-cooler. Which ever way your opinion falls there is no denying that the early Turbo Carrera's have finally started to receive the acclaim they deserve for not only their phenomenal performance but also their place in Porsche history. This example here is an investment grade car that will offer its next custodian a thrilling and unique ride for the next decade or five!