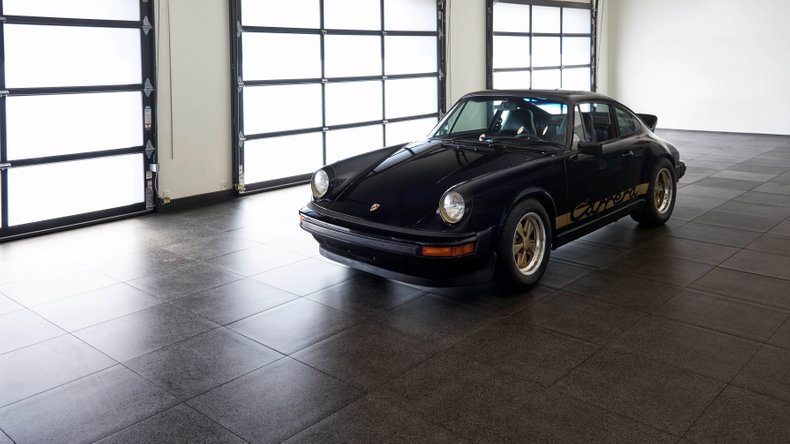 The year 1974 marked a watershed year for the Porsche 911. It was the first year of the new G series, which introduced a strengthened chassis to meet tough new US impact standards. The inner structure of the tub was reinforced. New “impact” bumpers with shock absorbers were smoothly integrated front and rear, introducing the new and now iconic “short-hood” look. The doors received new internal bracing to improve side-impact resistance. The revised front trunk space now contained a single battery and a collapsible spare tire nestled onto the top of the 21-gallon fuel tank. To meet US emissions requirements, US-specification Carreras used the same 175-horsepower flat six engine as the 911 S with K-Jetronic fuel injection, rather than the mechanically fuel-injected engine from the 1973 Carrera RS. That said, the new Carrera was still a muscular and good-looking machine, with flared fenders, wider rear wheels, and that familiar ducktail spoiler on the engine cover. It was also a stout performer, capable of reaching 60 mph from a standing start in just 6.5 seconds and topping out at 142 mph.

Originally sold in 1974 on the East Coast, this gleaming black Carrera was built in March of that year. This example was originally finished in Special Order Black (Code 700) with a Midnight Leatherette (Code 11) interior. Options specified on this car included Gold Carrera door script, sport seats, tinted glass all around, power windows, forged Fuchs alloy wheels, and a rear ducktail spoiler.

The car was sold in July, 2002, to its second owner in Massachusetts, by which time it had accrued 35,298 miles, as recorded on the title transfer papers. The second owner added about 5,000 miles before selling it to the third owner in November of 2012. It now has just 40,500 total miles from new. One of the previous owners had an air-conditioning system installed by a Porsche dealer; it has since been removed. After his purchase, the third owner sent this Carrera to Autobahn in Costa Mesa, California, for a complete, fully documented cosmetic and mechanical restoration by Porsche specialist Dan Smissen.

This fine automobile is as beautiful today as the day it left the factory. It is supplied with its original spare tire, inflator, and jack, as well as its original, complete, and unused tool kit. Its original owner's manual and all documents are part of the of car's portfolio in an aluminum attaché. The Carrera has been fitted with a new set of Pirelli P6000 tires and is ready to perform sporting a 175 bhp, 2,687 cc SOHC air-cooled horizontally opposed six-cylinder engine with Bosch K-Jetronic fuel injection, five-speed manual transmission, front and rear independent suspension, and four-wheel disc brakes.

Gaudin Porsche of Las Vegas is proud to be the very first Porsche Certified Classic Partner in North America.