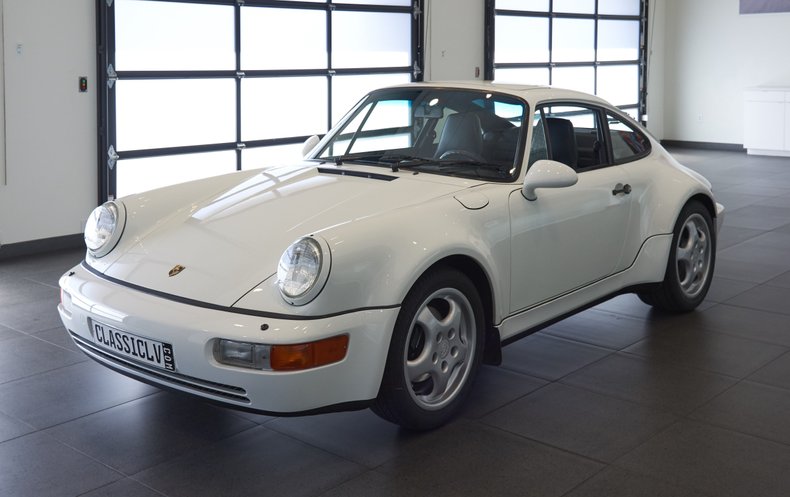 In 1994 the all new 993 generation of the 911 was already being released. However, the US release of this all-new 911 was not going to happen until 1995. So for 1994 Porsche decided to spice up the 911 Carrera Coupe by offering a limited edition coupe based on car they built for the European market the year before; the Carrera C4 Wide Body. In 1993 this model was available in Europe as option code M096 Jubilee Model "30 years 911". This wide body version of the C4 was quite the looker and sold well overseas. Porsche listened to their customers and in 1994 introduced what the factory literally called "Wide Body". The one-year production run was just 267 cars with this option code M718 and the car was officially called the Carrera 4 Wide-Body "30 Years of Excellence".

The car we proudly offer here today is a beauty. One of just 29 painted in Grand Prix White, it is extremely rare. The car has covered just 32,405 miles from new. Our Porsche Gold Certified Classic technician, Frank Collins, has serviced this vehicle and replaced the springs and shocks, painted the wheels, installed a new set of Bridgestone Potenza S-02A's, replaced the clutch and a performed a major service. This car is completely refreshed and ready to be enjoyed or moved into a private collection.

This C4 has an all black leather interior and a black headliner. The inside of the car appears new, free of cracks, creases or wear. The standard seats offer a ton of comfort. The controls all work as they should. This car also has the optional rear window wiper, which just looks cool on the back glass!

If you have been looking for an unusual 964, a great driving air-cooled 911, a rare 911 with low production numbers and something that is both sure to turn heads and prove to be a great investment, this is your Porsche! Contact Steve Thiel to purchase this fabulous Classic Porsche @ 702-383-6080 or sthiel@gaudinporschelv.com.