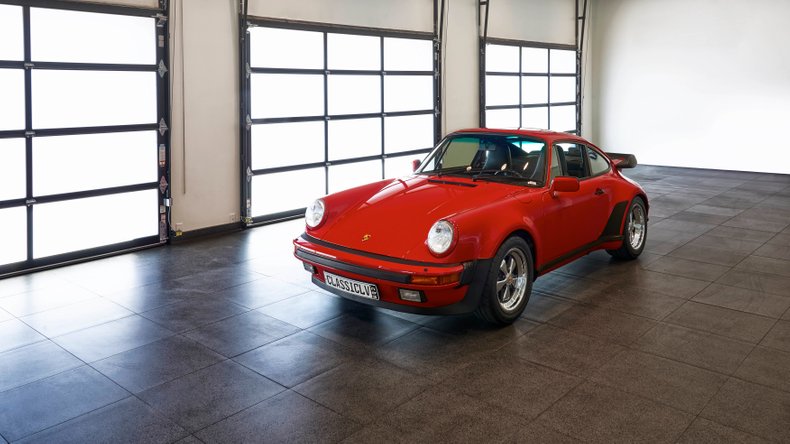 Born and raised on the west-coast, the Guards Red exterior paint is Spectacular.

The Porsche 911 Turbo debuted at the Paris Auto Show in October 1974 before going on sale in Europe in the spring of 1975 with exports to North America beginning in 1976”. The reason for this development was to aid Porsche's racing efforts. The FIA announced that “Group 4” and “Group 5” race cars for 1975, and beyond, had to look like the street-going production models that would be for "Normal Sale" by the manufacturer. In order to compete in these classes, a new 911 line had to be developed for the public.

Porsche's street legal turbo development started in 1973. Turbo technology originally developed for the 1974 911 Turbo Carrera RSR 2.1 race car and the 917/30 CAN-AM car to the 3.0 L flat-six from the Carrera RS 3.0, created what Porsche internally dubbed as the “930”. With a more powerful turbo engine, the new 911 chassis and bodywork needed to be enhanced too. Modifications included a revised suspension, larger brakes, stronger gearbox, and wider wheels with upgraded tires combined with flared wheel arches were added to increase the 911's width and grip; thus making it more stable when cornering. Also, the iconic “whaletale” rear spoiler rounded out the package which not only made a lasting visual statement but also permitted more air into the engine compartment and created more downforce at the rear of the vehicle.

This 1987 911 Turbo Coupe was originally purchased in San Diego and has lived most of its life in the warm dry air of Las Vegas. It was recently acquired from the original owner, a great friend of our dealership. The Turbo coupe has just undergone a complete glass-out repaint in its original color of Guards Red. The interior is the original black leather and the car is in excellent overall condition. It comes complete with original manuals, tool kit and other extras, including a folder of service receipts. With no accident history and just over 52,000 miles, this Turbo checks all the right boxes for desirability and would make a wonderful addition to any collection or as a perfect enthusiast driver.

Gaudin Porsche of Las Vegas is proud to be the very first Porshe Certified Classic Partner in North America.