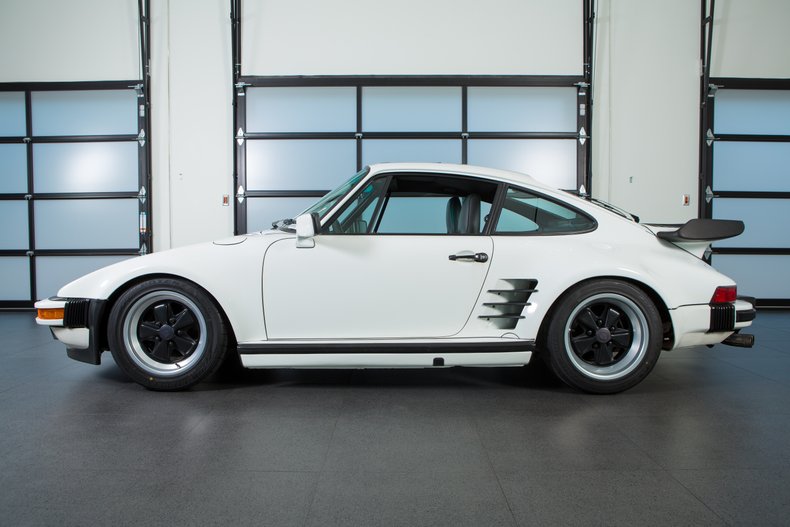 Porsche offered the ”Slantnose”, or "Flachbau" (in German Porsche factory speak meaning "flat construction" or “flat build”), option under the "Sonderwunschprogramm" (special order program) for the 930 Turbo beginning in 1981. The concept of fitting an aerodynamically slicker nose with less frontal area to the standard 911 was inspired by the Porsche 935 race cars that made their way to LeMans victory in the late 1970s. Each “Flachbau” unit was handcrafted by remodeling the front fenders with “slanting” lines and flip up headlights, and additional bodywork that included rocker panel extensions, and uniquely styled intake vents ahead of the rear wheels. Very few of these cars were ever built with this special Slantnose option 505, in fact, only 948 units left the factory in Zuffenhausen from 1981 to 1989, making these original cars rarer than the legendary 1973 Carrera RS.

This 1989 930 Turbo Slantnose Coupe was recently acquired from a local collector in highly original and unrestored condition with only 50,818 miles on the odometer. The 1989 model 930 Turbo was also the only year of the 5-speed manual transmission for the 930 Turbo, and the final year of the “G-body” 911s before moving to production of the 964 series 911s. This incredibly rare car is finished in its original Grand Prix White paint over gray leather sports seats, checks all the boxes of desirability in today's enthusiast market. The sale of this vehicle also includes the original manuals, tool kit, additional keys, and service history.

Gaudin Porsche of Las Vegas is proud to be the very first Porsche Certified Classic Partner in North America.